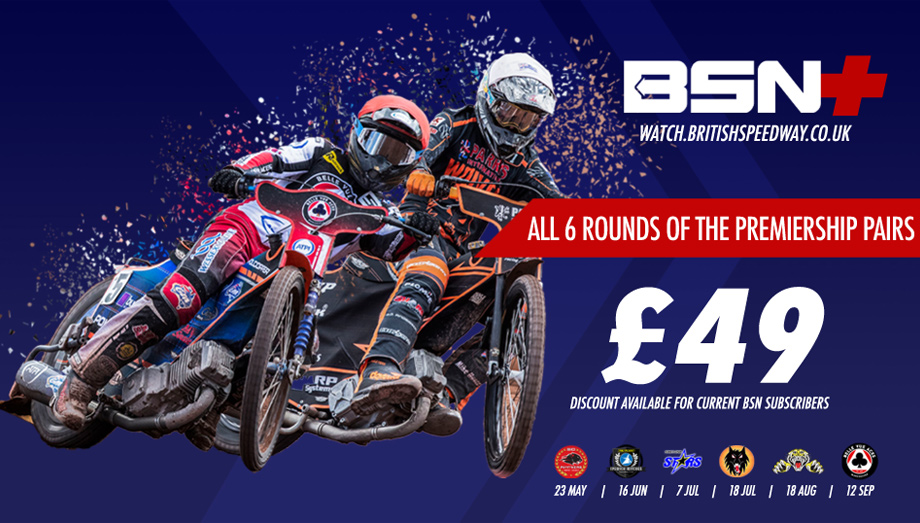 ALL six rounds of the newly-launched Premiership  Pairs competition are being live streamed.

One round takes place on each Premiership track, and season passes are available for £49, with a discount available for those who already subscribe to BSN’s Championship coverage.

Season passes can be purchased from the following link:
https://watch.britishspeedway.co.uk/orders/customer_info?o=75222

Individual passes can be purchased by browsing the specific meeting and clicking “get access now”:
https://watch.britishspeedway.co.uk/categories/bsn-plus

Each round is contested over 17 heats – 15 qualifying races, a semi-final and a final.
The qualifying rounds pit each team against each other once and a 4-3-2-0 scoring format is in place to make team riding crucial, providing an advantage for any pair that finishes second and third over a team with riders in first and last.
The Rising Star (RS) from each club will also be included and must take at least one of his team’s five rides.
The team that finishes top of the scoring chart heads straight into the final.
The teams that finish second and third race against each other in a semi-final. The winner then takes on the team that finished top.

The tally will be added to after each round – one will be hosted by each Premiership track – with the team that finishes top crowned Premiership Pairs champions.