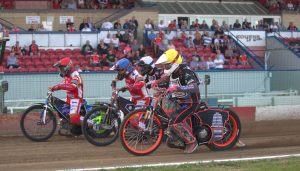 KENT produced a dramatic comeback to edge out Scunthorpe 46-44 despite trailing by ten points with four heats to go.

The Kings recorded three 5-1s in those closing races, including a decisive maximum from Scott Nicholls and Troy Batchelor in Heat 15 after Scorpions guest Broc Nicol had been penalised for movement at the start.

The result means the Kings still have an outside chance of finishing in the top six, whilst the Scorpions could be under threat if they fail to win at home to Poole on Friday.

Nicholls (14+1) said: “Our team has really gelled, and never knows when to give up. It’s a shame the way season started but it’s great to see the fans happy, I love the fans and I love it here.”

Scorpions’ Josh MacDonald (10+1) said: “It’s not great to lose when we had the lead that we did. But it is what it is and not many teams have come close to Kent around here since they strengthened their side. They came back at us in the end, so fair play to them.

“We knew it would be tough coming here. The one league point we did get tonight may prove crucial, but when you’re looking at maybe coming away with four with just a few races to go, of course it’s disappointing to get just one.”