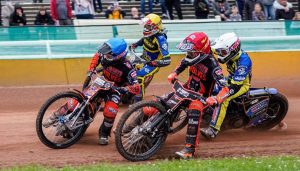 WOLVERHAMPTON extended their winning home start by defeating Sheffield 48-42 in the return of Premiership action to Monmore Green.

The result moved Wolves to within five points of leaders Peterborough, whilst the Tigers salvaged what could prove to be a crucial league point, despite having been 37-23 down after ten races.

Sam Masters led the way with 10+1 for the home side, all of whom won at least one race, whilst Troy Batchelor’s (11+1) three victories were integral to the Sheffield comeback.

Masters said: “We haven’t raced here for a long time and the last time we did, it was against them so we didn’t really have any advantage over them going into this.

“We got the job done though and we beat a good team so we can’t complain. We’ve still got a lot of home meetings to do and surely we should get plenty of points from those so we’re sitting in a pretty strong position right now.”

“But the fact is that we have got a point out of the meeting when actually at one stage it did look dead and buried.”

“We did well early doors containing them, we then sort of lost the set-up a little bit and they hit us hard. We had a chat between ourselves though, we knew if we got it right we could be stronger at the end of the meeting, and that’s how it proved.”