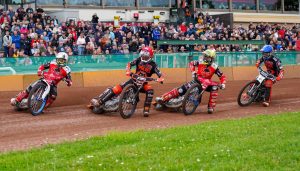 WOLVERHAMPTON remain top of the Premiership after overcoming a stern challenge from play-off rivals Peterborough with a 47-43 win at Monmore.

The Panthers, inspired by Hans Andersen scoring 15 at reserve, hit back from eight points down to trail by just two with two races remaining.

But Ryan Douglas and Luke Becker struck a vital Heat 14 5-1 to win it for Wolves, with the Panthers confirming a league point with Michael Palm Toft’s win in the last race.

Wolves boss Peter Adams said: “We knew it be a tough meeting tonight. Peterborough are well in the running for the title as they hadn’t lost away all season, but we had just about enough strength for them in the end.

“It was touch and go with them having such a strong reserve like Hans Andersen.”

Panthers manager Rob Lyon said: “It was disappointing to lose the meeting but at least we claimed a consolation league point and were very competitive.

“We’ve not lost all year away from home and we knew that the run we had would come to an end at some point. There’s too much quality in this league for us to go away all season and be unbeaten.”