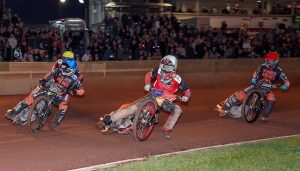 PETERBOROUGH stunned Wolverhampton with a 48-42 win at Monmore Green to take the race for Premiership leadership down to the final week.

The Panthers reduced the gap on their opponents to six points and they still have three meetings to come, whilst Wolves have now completed their regular campaign.

The home side were reduced to just five race winners in a departure from their normal dominance at home, with Chris Harris outstanding for the Panthers with 15 points including five victories.

Harris and Michael Palm Toft (10) ensured the away win with a 4-2 in the last race, with Hans Andersen once again a key man at reserve with 12+2.

Sam Masters (12) and Nick Morris (11+1) led the way for Wolves, who suffered their first home defeat of the season in the absence of skipper Rory Schlein, and must now wait to see if the Panthers slip up before the semi-final line-up can be confirmed.

Harris said: “It was a great team performance again. We pushed them hard last time and I had a better meeting tonight as well.

“We knew a result here would help – now we just go Thursday (at Sheffield), see how that goes and then we’ll worry about the home ones next week.”

Masters said: “(Rory’s) points obviously help on the track but his knowledge in the pits is incredible too, we missed that a little bit.

“He’ll have been watching on the TV and he can tell us where we went wrong.

“We’re not too worried really though – we’ll regroup and we’ll use this as a kick up the backside to keep on top of things.”