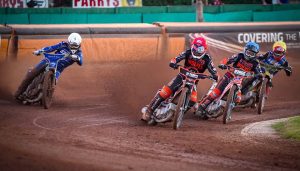 WOLVERHAMPTON took another step towards clinching top spot in the Premiership with a convincing 54-36 win over King’s Lynn.

It means Wolves could complete a clean sweep of home wins when they conclude their regular schedule against Peterborough next Monday – the only team who could deny them league leadership and the right to pick their play-off semi-final opponents.

Sam Masters raced to a 12-point maximum for the home side with Ryan Douglas adding 11. Thomas Jorgensen scored 11 for the Stars – but they suffered a major blow when Richard Lawson suffered a suspected broken collarbone in a Heat 5 crash.

Wolves boss Peter Adams said: “Before tonight it was all about making sure we won our final two home meetings – that’s one down.

“I thought despite the scoreline, some of the racing here was absolutely fantastic and given the water problems that the track staff have had here all day, I thought they did a terrific job.

“The boys loved it and I think it showed in their riding.

Stars manager Alex Brady said: “It’s not a fair reflection on the efforts. The lads battled deep but obviously losing Rich in his second ride was really, really tough.

“Trying to plug the gaps with Injury Rider Replacement and tac. subs and reserve switches is difficult to manage and juggle, but the boys gave it everything.”