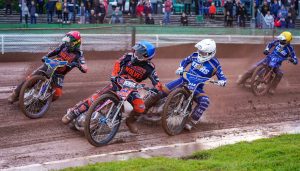 The Premiership leaders beat King’s Lynn 52-28 at Monmore Green as they added three more points to their tally at the top of the table.

Morris scored 13+2 and Luke Becker added 12+1 in a meeting which took place despite a heavy shower in the build-up, whilst Richard Lawson scored 9+2 for the visitors and debutants Kasper Andersen (7+1) and Ben Barker (7) both impressed.

Wolves skipper Rory Schlein said: “It was good that we had Nick and Luke trapping really well in particular because you really did have to trap well tonight.

“It’s nights like that and conditions like that when the rain comes down the way it did where you’re playing roulette.

“But we got through as a team in the end and we’ve come through a tricky spell with seven straight wins.”

Stars boss Alex Brady said: “The track was really tricky and the boys did everything they could.

“I was really pleased with their efforts and I was proud of them – but obviously I’m gutted because going down by 14 is not what we came here to do.

“There were some pleasing aspects and I thought both Ben and Kasper came in and showed they can offer us something different.”