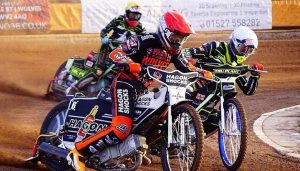 WOLVERHAMPTON continued their sensational start to the season with a 62-28 rout over Ipswich.

It was the perfect way for league racing to return to Monmore Green for the hosts after almost 600 days as they broke the 60-point barrier for the first time since the opening night of the 2018 season.

Nick Morris (12), Sam Masters (13+2) and Luke Becker (11+1) all went unbeaten by an opponent – but it was far from the night envisaged by the Witches, who had led the league table heading into the meeting, but managed just one race win from Jason Crump, with Danny King top-scoring on 9+1.

“All of our riders looked very sharp, they’re very hungry and they were terrific from start to finish.

“The track suited them down to the ground, the track staff have done a fantastic job and the riders are all just hungry for points as was clear to see.”

Ipswich manager Ritchie Hawkins said: “It was a very bad night at the office. We have been gating well in the first three meetings, but we didn’t gate well tonight and when we did make the start, we made mistakes.

“It was poor, it was a bad night, but we need to pick ourselves up and move onto Thursday.”