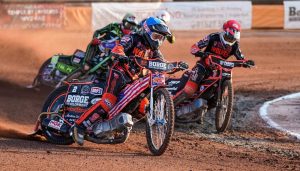 WOLVERHAMPTON moved to the top of the Premiership following their 52-38 win over Ipswich.

It was a fourth successive victory for the Monmore side who leapfrogged Peterborough on the back of their home defeat to Belle Vue, with a big crowd in attendance for the first meeting since restrictions were further eased.

Meanwhile the Witches’ reserves impressed with Paul Starke collecting 10+1 and Drew Kemp 9+2, but they fell short of a league point.

Schlein said: “Ipswich kept us pretty honest in the first half of the meeting and then we just clicked into overdrive.

“We reeled off a couple of 5-1s and and we rounded the night off on a bit of a roll.

“We’re notoriously good in the second half at home but it was good for us three heat-leaders in myself, Sam and Nick to get stuck into the heat wins when the pressure was on.”

“The reserves were banging points in, and it is a tough one because the top end were completely in the mix, they weren’t out of it, they looked like they could win races, but it wasn’t happening for them.

“However, if no-one is winning races in your top end and you don’t win one until Heat 15 then you are in for a tough night. It is disappointing, but you wouldn’t criticise anyone and it was an entertaining meeting.”