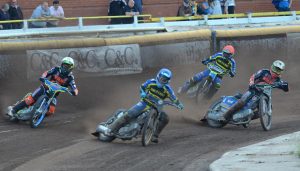 SHEFFIELD made the perfect start to life back at Owlerton with a 49-41 win over previously unbeaten Wolverhampton.

Wolves challenged strongly for a league point but were left frustrated by two race stoppages when in 5-1 positions, including when home man Josh Bates fell in Heat 12 and Ellis won the re-run. Nick Morris top-scored for the visitors with 10+1.

Sheffield boss Simon Stead said: “It’s the perfect way to start at home, against really good opposition, because we’ve seen what Wolves have done to a couple of teams already this year.

“Credit to our lads, they put in a really good performance, and I’m pleased. It’s a good start.

“I’m particularly happy for Batch, who’s not started the season how he would have wanted. But I knew he was only one start and a first corner and a race win away from a performance and a score like that one, so that was proof of what he’s really capable of.”

Wolves manager Peter Adams said: “I think Sheffield got out of jail. We traded blows with them on a track we haven’t been to for such a long time, and they had two strokes of good fortune which separated us from a point at least, and maybe more.

“It’s a very demanding track, and Sam (Masters) was suffering badly tonight because he had his first Covid injection yesterday, so that was reflected in his score.

“But Luke (Becker) had one look at the track and was fantastic thereafter, and Nick, Ryan (Douglas), they all rode their hearts out. They’re very disappointed at not taking a point here, but Monday is another day and we’ll see what the score is then.”