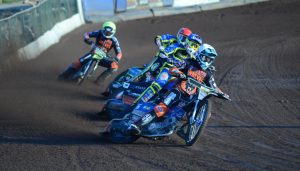 WOLVERHAMPTON secured their Premiership play-off place with an impressive 46-44 win at fourth-placed Sheffield on Thursday.

The visitors clinched their eighth successive victory when Douglas won Heat 14 whilst youngster Leon Flint pulled off a vital third place over home skipper Kyle Howarth – which became more significant when the Tigers gained a consolation 5-1 in the last race.

Jack Holder top-scored for Sheffield with 11 and recent signing Stefan Nielsen impressed on 10+1 – but Troy Batchelor failed to score from three rides.

Wolves boss Peter Adams said: “We had to battle hard and we were fortunate in having Ryan Douglas scoring so freely in the reserve position.

“We managed to squeeze all his seven quota of rides in and he was the star of the show for us.

“Everybody fought tooth and nail though because we wanted to win here.”

Tigers manager Simon Stead said: “Wolverhampton are riding very, very well and full credit to them – but that doesn’t make it any easier, we’ve not been good enough.

“After two away results that had set us up nicely to sort of cement our place in the play-offs, that’s a really disappointing result.

“I just never thought I’d see the day where I saw Batchelor scoring zero in this league. What we do is something I’ll discuss with him and the senior management of the club, and if there are options then we’ll explore them.”