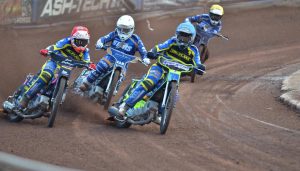 SHEFFIELD warmed up for the Premiership play-offs with a 61-29 thrashing of King’s Lynn at Owlerton.

The Tigers had three unbeaten riders in stand-in skipper Jack Holder (15), Josh Pickering (13+2) and Troy Batchelor (13+2) as they dominated the meeting.

Kasper Andersen scored 7+3 for the Stars, who end the season bottom of the table having won just two of their 20 matches.

Sheffield boss Simon Stead said: “We did the job, but we can’t read too much into that. Belle Vue will be a lot more problematic. They’re a super side and we know what to expect.

“I was delighted for Batch. It wasn’t that long ago that we were talking about zero for him in a meeting here, and now he’s gone through the card which is great for him and great for us.

“He’s had issues this year with his engines and things like that, but he’s starting to make it work and I hope that can happen on Thursday.”

King’s Lynn’s Lewis Kerr said: “It’s all about 2022 but I have to say that wasn’t good enough from us.

“I know it’s a tough place to come but I’m a little embarrassed to be honest, the scoreline doesn’t look good on our part.

“We should have done better and we all know that, but we have to learn from it and all we can do is put our hands up and say we weren’t good enough.”