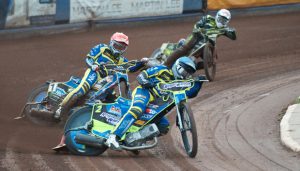 SHEFFIELD are on the verge of play-off qualification after their biggest win of the season against Ipswich on Thursday.

The Tigers were in a determined mood from the get-go and set about avenging back-to-back home defeats with a lightning start – opening up an eight-point lead inside five heats and pulling clear to win 52-38.

And the result means they require a maximum of five more points to confirm a top four finish, with six matches still remaining.

Jack Holder top-scored for the Tigers with 10+2 whilst reserve Stefan Nielsen impressed on 9+3. The Witches’ scoring was dominated by Danny King (13) and guest Chris Harris (12).

Sheffield boss Simon Stead said: “We were desperate for that. It was a really dominant team display.

“For one reason or another we’ve never really had all the boys firing together on one night and I’ve always felt we were solid in every department which has finally made a difference.

“We spoke about the importance of this fixture before the meeting and if we carry on riding like that then we’ll be a force to be reckoned with.”

Ipswich manager Ritchie Hawkins said: “It was another big defeat on the road but tonight, unlike other meetings where at least we have been in it for the first half of the meeting, we really weren’t in it at all.

“Danny was gating well and was gone, Bomber did more of his work from the back and provided the entertainment and they were our resilience.

“Jason (Crump) rode really well to get his heat win but overall, as a team it was nowhere near good enough.”