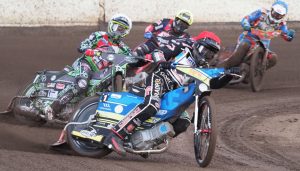 SCUNTHORPE are up to third place in the Championship after a thrilling 46-44 win over Redcar at the Eddie Wright Raceway.

The Bears clawed back from an eight-point deficit after Heat 6 and trailed by just two points with three heats remaining.

The hosts moved four-up and led 44-40 going into the last race, where the unbeaten Adam Ellis was beaten by Redcar star Michael Palm Toft, but Ellis held off former Scorpions Jake Allen for the vital second place.