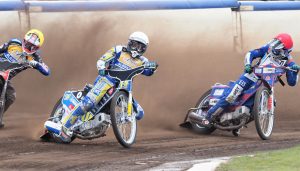 SOLID Scunthorpe raced to a comfortable opening-day Championship victory – even though Bjarne Pedersen took the individual honours for Plymouth.

The Scorpions were 56-34 winners at the Eddie Wright Raceway but Danish star Pedersen made a stunning return to British Speedway with an 18-point maximum.

However, whilst he collected more than half of the Gladiators’ total on his own, all seven home riders scored between seven and ten points, Josh Auty leading the way on 10+1.

Scunthorpe skipper Simon Lambert (7+3) said: “From a personal point of view, I’m chuffed to bits, while from a team point of view we got three points on the board and hopefully there’s many more to come. It was a solid, all-around team performance. We can take away so many positives.

“People have written us off this year, especially after we lost Jake Allen, but I think this showed that we can do it.

“Bjarne was mustard all meeting. We gave him a race at one point (Heat 6), where we passed and re-passed, but then he showed all his top-level experience. It’s an honour to be out there giving him a race, it’s the same with Crumpie (Jason Crump).”