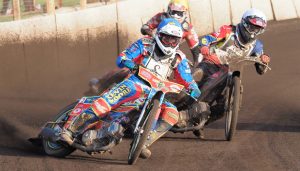 SCUNTHORPE completed a hat-trick of home Championship wins by seeing off Newcastle 57-33 at the Eddie Wright Raceway.

Thomas Jorgensen scored 14 points for the Scorpions and skipper Simon Lambert (13) won his first four rides before missing out on a maximum in Heat 15.

Connor Mountain battled his way to 10+1 for the Diamonds and James Wright (8+1) was their only race-winner, but Adam Roynon suffered rib damage in a heavy last-race spill.

Scunthorpe manager Dave Peet said: “It was a very good performance by the lads. The riders wanted more dirt, and they were given it.

“Some people may look at it and say Newcastle are not that strong on paper, but the job still needed doing. We set about the task and got it done and did it well.”

Newcastle boss Nigel Hinchliffe said: “With no effective No1, it made our already tough ask even harder and with Scunthorpe so very effective on their home track, it proved to be a step too far as we only had one heat winner out of 15.

“But it’s early days and we will regroup and get some results to be proud of.”