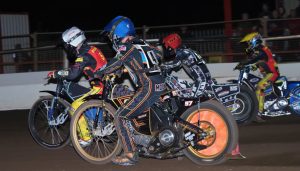 LEICESTER took a giant step towards the Championship play-offs with a 51-39 win at Scunthorpe to end the Scorpions’ 100 per cent home league record.

The Lions fought back from six-point deficit at the halfway stage of the meeting and finished strongly with three 5-1s in the final four races.

Ryan Douglas once again starred against his former club with 13+1, Aaron Summers proved a perfect guest for Nick Morris with 11+1 and reserve Zaine Kennedy chipped in with 10+1. Guest Connor Mountain scored nine for the hosts.

Manager Stewart Dickson said: “The interval gave us time to talk to the riders. We came out hungry and we responded really well to the ideas and thoughts that we discussed during the break.

“The back-to-back heat advantages was the turning point for us. We had the hunger and it was a real team effort.”