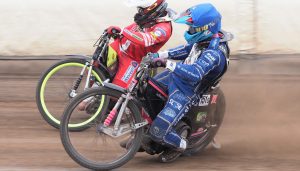 The scores were level with three races to go but the Scorpions then hit the Tigers with a triple blast to leave their opponents pointless from a league match for the first time this season.

Scunthorpe skipper Lambert said: “I’m so proud of the whole team. To be four down against Glasgow and then win by 12 points with a flourish of 5-1s at the end, it’s unreal really.

“We’re really buzzing after that, because we know Glasgow are strong. But it was such a good team performance from us. A lot of people wrote us off at the start of the season, but we’re showing what we can do.”