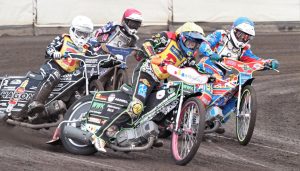 The Scorpions youngster scored 11+1 from four rides with Tero Aarnio notching 12 from five with the Scorpions doing enough to shake off the Brummies, who had started with a 5-1.

Chris Harris scored 12 for the visitors, whilst Scunthorpe join a group of five clubs on 31 points at the top of the table.

Palin said: “I’m happy to score my first maximum for Scunthorpe. I’m not sure what to say, I’m a bit lost for words, to be honest. I just made a start in Heat 2 and took it from there.

“I’ve been close to a maximum around here a few times, so to finally have one under my belt is very pleasing. I hope there’s many more to come.

“The team dug in and took the victory. It’s a team match, we win as a team and we lose a team and it was good to get the three points. It was a much-needed win and we pulled it off.”

Brummies boss Laurence Rogers said: “It was a tough result. We were in with a chance at one point, but it just didn’t happen for us.

“It was a great performance from Valentin (Grobauer) and there’s a lot to come from him after not having a great start to the year with injures, but he showed what he can do with three great wins.”