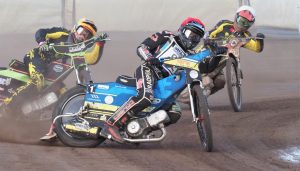 SCUNTHORPE survived a scare from Berwick before registering a 47-43 victory to make it six successive home wins.

The Scorpions trailed with four races remaining but hit back with two 4-2s and a Heat 14 5-1 from Jordan Palin and Tero Aarnio, with the Bandits doing enough for a league point in the last race.

Aarnio top-scored for the home side with 11+1 as they moved to within two points of leaders Glasgow, whose match with Plymouth was postponed. Dany Gappmaier also scored 11+1 for the Bandits.

Aarnio said: “For myself, I had a good night. As a team, we struggled a bit at times, but we pulled together and got the win.

“We’re not a top-heavy team. When we win meetings, it tends to be through us all chipping in and points being scored throughout the team. We’re all capable of scoring points.”

Berwick boss Gary Flint said: “We have had some great matches on the road this year due to the guys really putting the work and effort in to make these home sides work very hard for their wins, so we can’t knock the huge effort these Bandits are bringing to the game.”