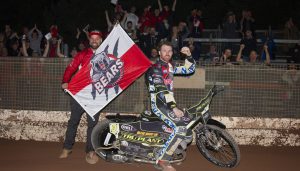 REDCAR overturned an eight-point deficit to beat Poole 48-42 at the Media Prima Arena – but the Pirates still went top of the Championship.

The visitors looked set for an away win when they led 34-26 with five races remaining, only for the Bears to produce a strong comeback.

Charles Wright racked up 15 from six rides for the hosts with Jake Allen adding 12+3. Steve Worrall (13) dropped his only points in Heat 15 for the Pirates with Danny King on 10.

The league point gained by the visitors takes them to the head of five teams all on 31 points at the top of the table – but promoter Danny Ford was far from happy with the outcome.

Ford said: “I am hugely disappointed with the final result. To be leading by eight points and then come away having lost by six is hard to accept.

“We thought we had the meeting under control at the halfway stage and again we just seemed to take our foot off the gas, and that is becoming something of an Achilles Heel for us at the minute especially on the road. We need to learn to press home that advantage and not allow points to slip away from us.

“In fairness, we knew it was going to be tough up here. After all, Redcar are play-off contenders and showed tonight why they are just that.”