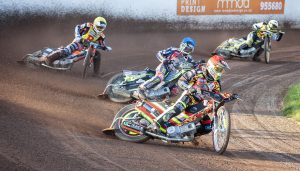 REDCAR fought back from eight points down to end Glasgow’s unbeaten record in a Championship thriller at the Media Prima Arena.

The Bears raced to 5-1s in the last two heats to complete a 47-43 victory, inspired by a 14+2 haul from skipper Charles Wright and 13+1 from fellow heat-leader Jake Allen.

Craig Cook scored 11 and Ulrich Ostergaard 10 for the Tigers despite missing out as a pair in Heat 15, and the visitors still took a league point from the narrow defeat.

“Going down there we would probably have taken a point, but when you’re leading like we were after 10 or 12 heats you’re looking for a lot more than that.

“It’s not like us to lose two 5-1s in the last two heats. It’s fair enough that happening in Heat 15 – it’s your top riders and that can happen – but the result in 14 was a bit of a shocker.

“It is what it is, we can’t win them all. When you consider they had to use tactical substitutes both at our place and at home to peg us back, that’s a compliment to us.”