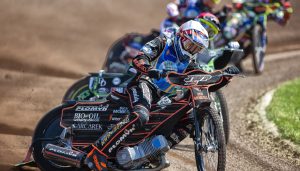 REDCAR and Edinburgh produced a second 45-45 draw in the space of three days as they shared the spoils at the Media Prima Arena.

The Monarchs fought back from a ten-point deficit and went into the last race level tracking Sam Masters, who had reeled off five wins from five, and Richie Worrall.

However, home skipper Charles Wright got in front in a hotly contested first corner and fended off Worrall for a 3-3 as the match ended all-square.

Wright scored 11 for the Bears with James Sarjeant collecting 10+1 against his former club, whilst Masters (16+1) and Worrall (10+2) starred for the Monarchs.

Worrall said: “For early in the season I’ll take that, two draws. I felt quick in 15, I felt faster than Charles, but he was doing some left turns on me – so I went over and said, ‘you should have put your indicators on!’

“But to be fair I would probably have done the same. I felt quick, I should have had him, but that’s speedway – you win some, you lose some.”

Sarjeant said: “I’m happy, a little annoyed with Heat 15 but going into the meeting I felt relaxed and ready to perform.

“We are definitely disappointed to draw the meeting, but it gives us something to work on, we have a good set of lads and we are gelling together really well!”