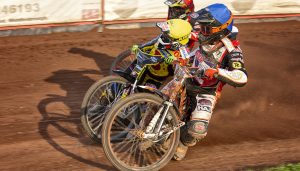 REDCAR were taken to a last-heat decider by Birmingham before securing a 48-42 victory at the Media Prima Arena.

Two successive 5-1s in Heats 12 and 13 put the Bears eight points clear with the latter producing controversy as guest Rory Schlein crashed out after a tangle with home skipper Charles Wright, and Brummies captain Chris Harris was then disqualified in the re-run in another battle with Wright.

But Harris (13+1) bounced back to head up a 5-1 to the visitors in Heat 14 and then split Wright (12) and Michael Palm Toft in Heat 15 as the Bears clinched victory with the Brummies taking a league point.

Drew Kemp impressed as a guest for Redcar with 11+3, but fellow reserve Jordan Jenkins suffered a wrist injury in a Heat 8 fall and took no further part.

Bears boss Jade Mudgway said: “It was nice to get back on track with a win. I think we made hard work of it at times, but it was a battling performance in the end and our heat leaders came through for us.

“Unfortunately, our injuries are piling up at the moment and we haven’t had any luck with them recently.”

Birmingham manager Laurence Rogers said: “I feel it’s the least we deserved. It’s a decent way to get back to racing and I can’t fault any of the boys’ efforts, they all battled hard.

“I wasn’t happy with either of those decisions and they did have a pretty big say in the final outcome.”