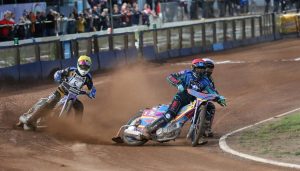 POOLE jumped up to second in the Championship table with a 57-33 win over injury-hit Scunthorpe at Wimborne Road.

The Pirates clocked up four 5-1 advantages in the first five heats to put the match beyond the Scorpions, who were without three members of their regular septet.

Skipper Danny King led the way for the home side with 13+1 from five rides, whilst Steve Worrall added 11+1. Guest Broc Nicol picked up 11 for the visitors.

King said: “It was good to have Ben (Cook) back with us tonight and I think it made a big difference to us.

“I am now looking forward to having a full complement of permanent Pirates when the other Ben (Benjamin Basso) is available, which I believe is on Friday.”

Scorpions boss Dave Peet said: “We had a rough night at Plymouth and this was always going to be a hard place to come. One or two of our lads were still feeling the effects of their crashes from the previous night.

“Poole was always going to be tough. I don’t think the scoreline gave credit to how much we contributed to the match. We took five heats to get dialled in, but then we played our part.”