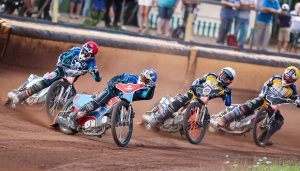 POOLE sailed into the quarter-finals of the Championship KO Cup with a dominant 61-29 win over Plymouth at Wimborne Road.

The Pirates already led by eight points going into the meeting and quickly put the tie beyond the Gladiators, who were limited to three race wins.

Rory Schlein dropped just one point from five rides to finish, with Steve Worrall adding 13+1 and Ben Cook and skipper Danny King were both paid for 11. Plymouth guest Craig Cook top-scored for the visitors with eight.”

King admitted: “It feels as though I am getting dialled in now. There just hasn’t really been enough track time to be honest but we are now about to get pretty busy with plenty of time on the bike and I am really looking forward to it.

“The team has bonded so well, and I think we can really kick things on now.”