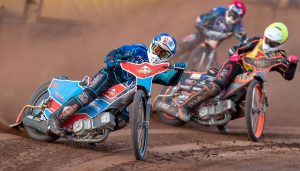 POOLE are five points clear at the top of the Championship after a 57-33 win over Birmingham at Wimborne Road.

Home skipper Danny King scored a 15-point maximum against his old club, whilst Steve Worrall added 12 in a powerful Pirates display. Erik Riss top-scored for the Brummies with 9.

King and his colleagues also praised the Poole track staff for their work in completing emergency repairs to the circuit after a hole appeared on the circuit in the early stages of the meeting.

Said King: “I took a few meetings this season to get dialled in, but I am happy with the way things are going right now. I feel really confident on the starts and that makes a difference.

“I would just like to offer up a big shout out to the track staff, and they deserve a pat on the back for all their hard work.”