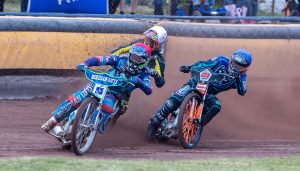 Cook, who impressed at Glasgow last week, racked up 13 points on his home debut, with Steve Worrall (13+1) dropping just one point and former Pirates star Hans Andersen making a successful guest appearance with 12+2.

Berwick reserves Leon Flint (11+2) and Kyle Bickley (8+1) both gave excellent displays for the visitors but they were left point-less from their Southern tour.

Poole boss Neil Middleditch said: “I thought he (Cook) was superb, especially after all his problems at Eastbourne in our opener, he is really beginning to show us what a good little rider we have in him.

“Overall I thought it was a good team effort all round. I am encouraged with the way the team is blending and as I have always said, trophies are not handed out in June, but there is enough talent in the side to give us real belief that we can be there at the end.”

Berwick boss Gary Flint said: “Again we saw plenty of effort from the Bandits tonight, but sadly yet again we left Poole with no league points although Leon and Kyle especially did their best to take something from the meeting.

“Well done to the Pirates, and their Ben Cook looks a real prospect for the future who was sensational.

“It’s time for us to regroup now and get ready to take all the points from Redcar Bears up at Shielfield Park on Saturday night.”