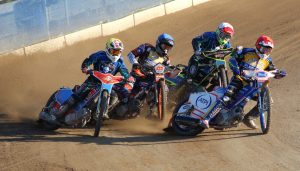 PLYMOUTH snatched a dramatic 45-45 Championship draw with Poole thanks to a last-heat 5-1 from Bjarne Pedersen and Jason Crump.

The Pirates led by eight points after Heat 5 but after the Gladiators mounted a comeback it was the two former Poole riders who combined in the decider over Steve Worrall and Danny King.

Pedersen scored 15+1 from six rides for the hosts and Crump added 9+2 on his home debut, with reserve Ben Cook leading the way for the Pirates on 12+1 and Worrall scoring 11+2.