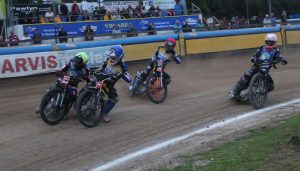 PLYMOUTH pulled off their best result since returning to Championship level by defeating in-form Edinburgh 50-40.

The Gladiators came back from an early four-point deficit and finished with two 5-1s, both involving Zane Keleher who has proved to be a major success since signing for the Coliseum club.

Bjarne Pedersen scored 13+1 for the home side with Keleher adding 10+2 and Jason Edwards – having been confirmed as Plymouth’s latest Rising Star recruit – notched 4+1. Richie Worrall scored 10+1 for the Monarchs, who missed out on a league point.

Edwards said: “I’m really pleased to be at Plymouth. It’s a track I’ve ridden quite a lot and I just need to be getting as many meetings as possible.

“Just to be next to Jason (Crump) in the pits and picking up little tips from him is invaluable and builds on the work I’ve been doing with the GB Academy.”

Monarchs star Kye Thomson (7) said: “It was pretty difficult – we held on for a long time, but it ended up getting away and it was their night.

“In my first one I thought there was going to be a crash so that caused me to come off, but I finished strong personally, it’s just a shame we couldn’t at least get a point.”