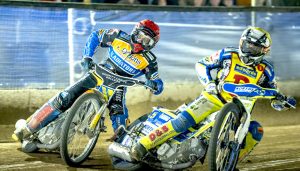 BIRMINGHAM look for rapid revenge over Plymouth tonight (Wednesday) after a 47-42 defeat at the Coliseum on Tuesday.

The Brummies led by nine points after six races but had to be content with one league point after the Gladiators finished strongly for another home win.

Birmingham co-owner Peter Mason said: “You can only admire Jason Crump who will always be regarded as one of the great riders in the history of the sport.

“His comeback has been a remarkable story and we know we’ll have to be on our guard to race against him tonight.

“Some of our boys were only just starting out as juniors when he initially retired so for them to be racing against a true legend of the sport is wonderful for them.

“I’m expecting a really good, competitive meeting and once again there will be the opportunity for fans to visit the pits and get autographs and selfies.”