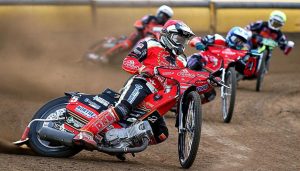 PETERBOROUGH charged up to second place in the Premiership by beating Wolverhampton 51-39 in a pulsating clash at the East of England Arena.

The Panthers recorded a third straight victory with a strong all-round display with Bjarne Pedersen (12+1) enjoying his best home performance so far and Chris Harris (10+1) providing some thrilling racing moves.

Wolves were in contention for much of the meeting with American youngster Luke Becker piling up a hugely impressive 15+1, whilst Ryan Douglas won his last two rides to end on 13+1.

Panthers boss Rob Lyon said: “I’m delighted with that because Wolverhampton are such a good side and have made a good start to the season.

“It’s great for us to have 10-points from the last week and hopefully we can keep it going.

“I’m told it was a good meeting to watch, but when you’re so involved as a team manager it’s hard to appreciate that. Hopefully it’s come over well for the TV viewers and it’s a good reflection on the sport.”

Becker said: “I’m pleased with my own performance, it’s a tough place to come and you have to get the set-up right.

“It’s a shame we couldn’t do it as a team, but we just have to take the positives and move on from this one.”