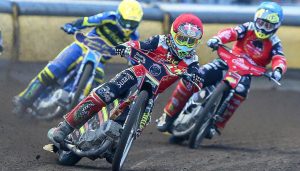 PETERBOROUGH continued their red-hot form to move back to the top of the Premiership.

The Panthers beat Sheffield 54-36 at the East of England Arena as they rounded off their June fixtures with a fifth successive victory in a meeting initially delayed due to the weather.

Skipper Scott Nicholls led a solid scorechart with 10+2, and youngster Jordan Palin enjoyed his best night at the top level with 7+1 including two race wins.

Boss Rob Lyon said: “Tonight surprised me a little bit; we had the problems with the weather and the track before the start, but it turned out to be good and the boys just got on with it.

“It was a solid performance all the way through though against a good Sheffield outfit.

“I thought it would be a lot tighter, but the team spirit here is unbelievable at the moment and we just need to keep taking it one meeting at a time.”

Jack Holder (12+1) and Adam Ellis (10+1) contributed the vast majority of the Tigers’ points – but Ellis admitted it had been a night to forget for the team.

He said: “It was difficult. We didn’t really get going from the off, which was frustrating, but we fought hard and what can we say, they’re strong around here.

“We thought we had a chance here though, with the track being similar to ours, but it just wasn’t to be.”