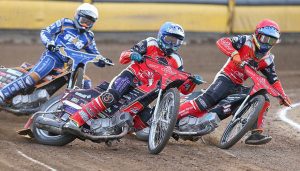 PETERBOROUGH secured their first win of the season in style with an emphatic 58-32 success over rivals King’s Lynn.

It was an eye-catching, full team display from the Panthers who claimed the A47 Derby bragging rights in convincing fashion – with skipper Scott Nicholls rolling back the years with a paid maximum (13+2) and in-form reserve Ulrich Ostergaard adding 11+2.

Richard Lawson (10+1) and Thomas Jorgensen (10) top-scored for the Stars, who were without injured captain Lewis Kerr, but No.1 Erik Riss failed to score.

Panthers boss Rob Lyon said: “It was a great performance. It really was a great reaction to the disappointment of last Monday here and it was a real true team performance at that as well.

“From 1-7, everyone chipped in with some great points, topped off by the skipper getting a paid maximum.

“That rounded the night off superbly for us and there was plenty we can take from tonight into the next meeting and into the rest of the season.”

King’s Lynn manager Peter Schroeck said: “Erik in particular was struggling with the set-up. He’s a very deep thinker as well, and he just couldn’t get comfortable out there.

“Everybody knows he’s no slouch though, we all know what he’s capable of and he’ll be back in the big points very soon, I have no doubt about that at all.

“It was a very tough evening for us altogether. I can’t knock the boys for not trying, we just could not find the right set-ups.”