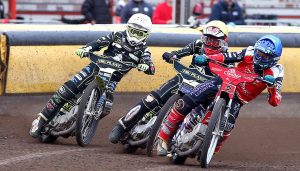 PETERBOROUGH moved top of the Premiership table with a tense 47-43 win over local rivals Ipswich at the East of England Arena.

Bjarne Pedersen and skipper Scott Nicholls were the Panthers’ heroes in a last-heat decider with a second successive 4-2 after Ulrich Ostergaard had superbly overtaken Jake Allen in Heat 14 to set up the victory.

Ostergaard again starred at reserve with 12 points and Pedersen added 11+1, with Danny King top-scoring for the Witches on 9+1 as the Witches left with a league point.

Panthers boss Rob Lyon said: “Ipswich pushed us all the way, and I expected it if I’m honest. They’ve had a change of team, I knew it would be tough and I actually predicted that we would win and they would nick a point.

“I think Bjarne’s professionalism has shone through, he’s got dialled in, his engines are good and he likes what he’s on. It was a no-brainer for him to go off gate one in Heat 15 when we needed three points.

“Top of the league is a nice feeling but it doesn’t really mean a great deal as other teams have lots of matches to catch up. But we’re there to be chased now, and we need to keep that momentum going.

Ipswich manager Ritchie Hawkins said: “I have no complaints about the result, they just got the better of us. We have a consolation point, and it is just that as with the position we have been in we needed a win and maybe it was an opportunity to do that.

“On the flip side, it should be the start now to get on a run that we need to make the play-offs as it was a much better all-round team performance and it was a big improvement.”