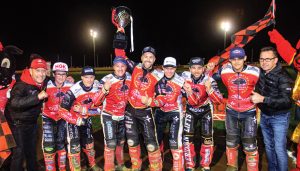 PETERBOROUGH were crowned Premiership Champions with a ten-point aggregate win over Belle Vue in a memorable Grand Final.

The Panthers won the second leg 51-39 in front of a packed house at the East of England Arena, turning around their two-point deficit in Manchester on Monday.

The Aces had doubled their overall advantage after four races of the return, but the home side dominated the mid-stages of the meeting with three 5-1s between Heats 6 and 10.

Skipper Scott Nicholls and Rising Star youngster Dan Bewley clinched the title with a 4-2 in Heat 14 after the Panthers had briefly been delayed by a stunning ride by Aces No.1 Dan Bewley to come from the back and win Heat 13.

Bjarne Pedersen marked his last official meeting before retirement by top-scoring with 13+1, whilst Michael Palm Toft again went through the pain barrier with 12+1 and Nicholls added 10+1 as he captained a top-league winning team for the third time.

Bewley scored an outstanding 15 for the Aces with five wins after a Heat 1 last place, and their own Rising Star Tom Brennan raced superbly for 11 points from seven rides.

Panthers boss Rob Lyon said: “It feels fantastic. It’s been a juggle ever since Ulrich (Ostergaard) was injured and we’ve been covering him in all of our matches, but we got there, we got over the line and we deserve it – the boys have been absolutely fantastic all year.

“We knew all about Belle Vue’s record here, but whichever way you looked it, whichever decision you made, it was always going to be a difficult tie with four good teams in the play-offs.

“But we had to believe in our own ability and take advantage of what we felt was the right thing to do.

“We saw again tonight how we rallied in mid-meeting, we started to edge away, and we had enough in the tank to see us over the line.”

Meanwhile Belle Vue boss Mark Lemon accepted the best team had won the Grand Final after his side again had to settle for the Premiership runners-up spot.

Lemon said: “We gave it everything we had tonight. It was a classic Final that came to a head in Heat 14.

“We still had the chance to go to golden heats after Tom (Brennan) and Charles (Wright) gated on a 5-1, but sadly that didn’t happen after Charles suffered an engine failure.

“Missing Brady (Kurtz) definitely hurt us. We only scored four points from R/R but nevertheless the boys put in a solid campaign, we just didn’t hit form at the right time.

“I can’t fault the guys in 2021. Their fortitude, desire and commitment all season has been brilliant. They worked as a cohesive group, and they deserved better.

“Full respect to Peterborough. They were the better team on the night, and we offer our congratulations to them as Premiership champions.”