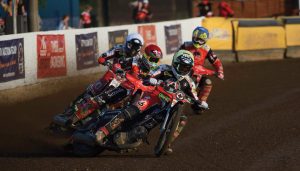 BELLE VUE ended Peterborough’s six-match winning run with a 52-38 triumph at the East of England Arena – their second away victory at the venue this season.

Dan Bewley broke the track record in Heat 5 as the Aces hit back from an early six-point deficit to secure all four league points.

Bewley (13+1) and Brady Kurtz (10) ensured the visitors pulled clear with a 5-1 in Heat 13 and they put the match completely beyond the hosts with another 5-1 in the next through Charles Wright and Jye Etheridge.

Skipper Steve Worrall notched 10+1, as the Aces operated rider-replacement for his brother Richie.

Chris Harris top-scored for the Panthers with nine as they were knocked off the top of the Premiership.

Aces manager Mark Lemon said: “Last week was a big wake-up call for us at home and I couldn’t have been more impressed with how the boys adapted and responded against Peterborough.

“Track conditions were quite heavy going early on and seemed to favour the inside gates, but as the meeting went on things really came together for us and the boys were ready to pounce.

“It was a big blow for us to lose Richie just hours before tapes up, but the rest showed a lot of resilience and dug deep, as they always do, to turn things around and they came away with the victory they deserved as well as all four league points.”

Panthers boss Rob Lyon said: “I thought it was going to be a tight meeting anyway, and I predicted we’d come out on top by a couple of points, but fair play to Belle Vue – they were the better team towards the end of the meeting.

“They certainly put it to us and were comfortable in the end, but we know the reasons why we’ve lost, just as we knew after the first home meeting of the season.”