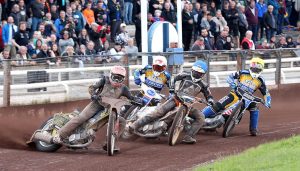 NEWCASTLE quickly bounced back from their heavy home defeat to Poole by beating Plymouth 45-33 in the second part of a double-header.

Ben Barker led the way for the Diamonds with 11 points from four rides, whilst guest Paul Starke contributed nine in a meeting which was curtailed two races short due to a heavy downpour.

Bjarne Pedersen won three races on his return to Brough Park and finished with 11, whilst Alfie Bowtell scored 10 at reserve, but the Gladiators fell short of a league point.

Diamonds boss Steve Pate said: “This was more like it! Huge determination from the lads, and this was against Bjarne Pedersen and Jason Crump no less, so to get a solid win over the Gladiators was reward indeed.

“Ben looked a different rider in this match, as did the whole team who were determined not to go down twice in one night, and they really fought hard to get this result, which was well deserved.”