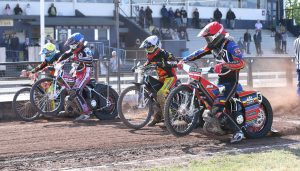 NEWCASTLE claimed their first win of the season by seeing off Championship holders Leicester 49-41 at Brough Park.

Steve Worrall proved a perfect guest for the Diamonds with 11 points, and Matthew Wethers also won three races for the same total – whilst reserve James Wright (11+2) and Connor Mountain (10) also chipped in with double figures.

Kyle Howarth scored 12 for the Lions who fell short of a league point despite a 10+1 haul from youngster Dan Thompson at reserve.

Newcastle boss Nigel Hinchliffe said: “It just shows what a replacement No.1 who can score decent points does for us. I always believed this team could do that, but it needed a top man in the lead position to bring the best from the rest.

“I also believe this is the start of our upturn in fortune, so we’re going for much better results from now on.”

Lions manager Stewart Dickson said: “Take nothing away from Newcastle, they made an excellent guest choice in Stevie Worrall, and I also had James Wright down for ten to twelve points as well. They deserved to win, and we got beaten by the better team.

“But no disrespect to them, with the team we have we should be at the very least taking a point, and away matches are now slipping away from us with three gone already.

“I know we’re okay at home, but we need points on the road and we have a problem in that department which we need to address.”