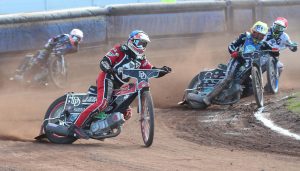 EDINBURGH are through to the KO Cup quarter-finals after winning 52-38 at Newcastle on Sunday.

The Monarchs only led by four points going into the meeting but performed strongly at Brough Park with eleven race winners, with Worrall brothers Richie and brother Steve – who was guesting at No.1 – both scoring 13+1.

The Diamonds could take encouragement from the continued good form of James Wright with 10+2 in their first home meeting, and Adam Roynon collecting ten points from four rides.

Stand-in Edinburgh skipper Josh Pickering said: “It was a great team performance, we came here with a job to do and we knew we were capable of it.

“We got off to a good start and we maintained it. I was a bit disappointed with my ending, but at the end of the day we won as a team and that’s great.”

Newcastle boss Nigel Hinchliffe said: “I have to say I’m pretty satisfied after both our matches against Edinburgh, despite the defeat this afternoon.

“We are badly missing Ben (Barker) and unfortunately our No.1 replacements haven’t delivered the sort of points Ben would have scored, so taking that into account the lads have put the effort in, and while we didn’t make the next round of the cup, there’s a lot to build on as our League programme gets ever closer.”