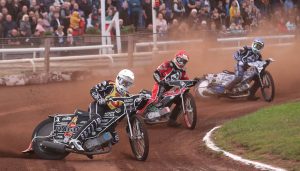 An emotional night at Brough Park in what could be the final meeting at the venue saw the contest go down to a last-heat decider.

Home star Max Clegg (13+2) won the race but Brummies duo Erik Riss (15+1) and Chris Harris collected a 3-3 after Connor Mountain had crashed out.

Reserve guests Leon Flint (12+2) and James Sarjeant (8+1) played a vital role for the visitors, who now need to win Wednesday’s return fixture at Perry Barr and then avoid defeat at Glasgow on Friday to make the top six.

Birmingham boss Laurence Rogers said: “To say we only had three of our regular Brummies, of course I’m delighted to get the win.

“Unfortunately, it’s not quite the four league points we were hoping for and that does put more pressure on our final two meetings, particularly at Glasgow next Friday where we’ll now need a draw if we win at home on Wednesday.

“But still, to get another away win was good and we can’t complain too much.”

Newcastle owner Rob Grant said: “We had hoped to go out with a win on such an important and emotional night, but a critical point was lost after a disastrous Heat 2 with Adam (Roynon) breaking a chain and Archie (Freeman) having a jammed throttle, and it proved that uncontrollable 0-5 was the race that critically lost us the match.

“But it was the occasion which won the night with a massive crowd and an atmosphere like we’ve never had for ages, especially with the track walk which saw hundreds of folk tread the shale for one last time.”