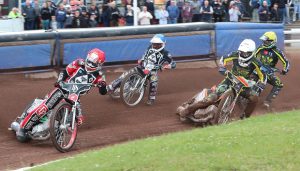 NEWCASTLE produced a strong finish to defeat Berwick 49-40 to consolidate their place in the Championship’s top ten.

The Diamonds led by just one point with three heats to go, but then recorded two successive 5-1s to put the match beyond the Bandits.

Reserve James Wright piled up 11+3 from six rides whilst Max Clegg returned to form with 10, a total matched by guest Ricky Wells. Kasper Andersen impressed for the Bandits with 13+1 from seven rides.

Newcastle boss Steve Pate said: “This was a vital win for us as we needed to prove we can take good wins, and this was a good win!

“This meeting proves what we can do, and now we need to continue for the rest of the season.

“It was great to see the Max Clegg from 2019 back to his brilliant best. The lad’s a star and tonight we saw that.”

Bandits manager Gary Flint said: “Without Jye (Etheridge), Dany (Gappmaier) and Leon (Flint) we were up against things from the off, and Theo (Pijper) had an off-night, but the guys pulled together and for a good while really worried the Diamonds who were wondering what was going on.

“Unfortunately we lost our grip over the last three races, but Heat 10 didn’t help after Theo was excluded and then Kye Thompson was when Adam Roynon fell – but to be honest we though at least it should have been all three back and thought that exclusion somewhat controversial.”