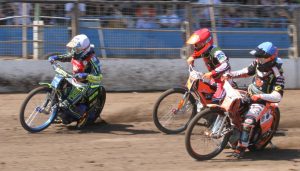 KENT pulled off a last-heat 47-43 win at Mildenhall to move up to third place in the NDL table.

Former Fen Tiger Ryan Kinsley won the vital Heat 15 with Dan Gilkes adding third place after the home side had forced a nervous finale with a 5-1 in the previous race to go just two points behind.

Gilkes, with 13, was unbeaten until that final race, whilst Kinsley won four heats to finish on 12 having been disqualified from Heat 13. Reserve Jake Mulford added 10+1.

Jordan Jenkins scored 12 for the Fen Tigers who were left to rue a succession of falls as they lost their home opener.

Mildenhall boss Malcolm Vasey said: “This was not the start to our home campaign we wanted and our slow start to the meeting ultimately cost us our chance of victory in the end, but the lads battled back hard in the second half of the meeting.

“A lack of meetings may have cost us especially out of the starts, but there was considerable promise on show from the boys and we have plenty to build on. We will dust ourselves down and go again at Berwick next Saturday.”