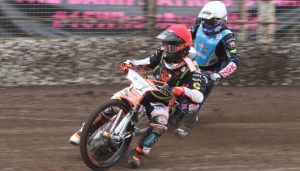 MILDENHALL put their first home win of the season on the board by overcoming Armadale 50-39 at West Row.

Jordan Jenkins made a successful return to the side with 13 points whilst Jason Edwards added 12+1 as the Fen Tigers pulled clear in the closing stages of the meeting.

The Devils challenged strongly for a league point but missed out after a solid display, with Danny Phillips top-scoring on 10+1.

Mildenhall boss Malcolm Vasey said: “It was great to have all seven riders available today and the team spirit was very positive. Everyone contributed to our victory, and we now have a solid base to build on.

“Elliot (Kelly) was smiling again, clearly responding to the help he was receiving from Jon Armstrong in the pits and both Jordan and Jason returned to the team and put in fine performances.”

Devils manager Alan Budzynski said: “I thought we were unlucky not to come away with something. Several times we were well placed in heats which were stopped and didn’t do so well in the restart.

“The track was pretty slippery at the start. I was pleased to see George Rothery have his best meeting for a while, and Gregor Millar is certainly making progress.”