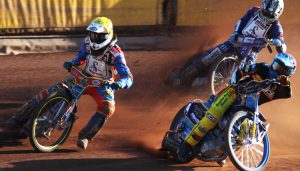 LEICESTER are through to the KO Cup semi-finals after a 50-40 win over Scunthorpe for a 24-point aggregate victory.

The Lions were never threatened overall although the Scorpions gave a spirited display in the second leg despite the loss of No.1 Josh Auty who was detained in hospital with neck pains after a crash with Dan Thompson in Heat 11.

Ryan Douglas led the hosts’ scoring with 13 and captain Kyle Howarth added 10+1, whilst Tero Aarnio collected 11 and Thomas Jorgensen 9+1 for the visitors.

Leicester boss Stewart Dickson said: “We’d done the hard work in the first leg really. We ended up 50-40 here – but for me that’s not as convincing as what it should have been.

“We’re not firing on all cylinders, I think everybody can see that, but I’ll let the dust settle on tonight and see where we go tomorrow.”

Scunthorpe manager Dave Peet said: “When I got to him (Auty), you could only see his helmet, because he was that far under the fence, so it took a good few minutes to get him out from under there.

“The good thing is he could move everything, and he was talking. He wasn’t fully compos mentis – he was feeling dizzy. He’ll have the night in hospital, and we’ll take it from there – but I think he’ll be okay.

“At one stage I thought it was going to be a cricket score, but our lads stayed on it and after the break, the track started to come to us.”