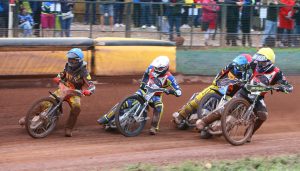 LEICESTER defeated Redar 51-39 in the Championship with youngster Dan Thompson starring with a 13-point haul at reserve.

Thompson won four races and was involved in three key 5-1s for the Lions in the first half of the meeting, whilst skipper Kyle Howarth (11+2) and Ryan Douglas (11+1) also hit double-figures.

Guest Richard Lawson scored 11 for the Bears and Michael Palm Toft added 10+1 but they fell short of a league point at the Paul Chapman & Sons Arena.

Leicester boss Stewart Dickson said: “Redcar are one of the fancied teams, but we re-iterated what I’d said during the week when we were on the track walk, the riders were up for it, and to send Redcar away pointless was pleasing.

“There were many people who doubted me putting the twins in – I think they can see now that we do have something special.

“Obviously Dan will get the plaudits tonight, but Joe also scored paid-seven, and eight points here last week, so they’re taking turns and it’s great to see. Long may the two of them continue in that form.”