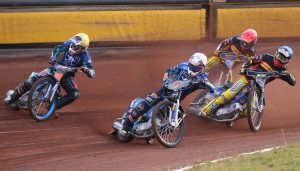 It was the Pirates’ first away league victory back at Championship level and they never trailed throughout a tight encounter with no more than four points between the sides.

The scores were level with two races to go but reserve Danyon Hume popped up with a vital win in Heat 14 as the Pirates edged back ahead, and then Steve Worrall competed an impressive display by holding off Nick Morris in the decider until the Lions man fell on the last lap.

Worrall scored 14 for the visitors with skipper Danny King adding 10+1. Hans Andersen won his first three races to finish on 12, as the Lions lost at home in an official match for the first time in nearly three years.

Leicester boss Stewart Dickson said: “I think Poole were the better side, and credit has to go to them.

“We can offer excuses, a couple of our guys were off-form, but the bottom line is Poole are a decent side, and I did say beforehand we had to make sure we kept the back door closed at home – and we didn’t do it.

“I’m not silly enough to think we’re going to be unbeaten the whole time I’m here, and now it’s about how we pick up and re-group – we have big meetings on Tuesday and Wednesday where we’ll try and claw back the points we lost tonight.”