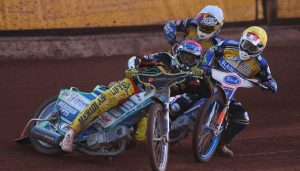 LEICESTER consolidated their position in the top six of the Championship by defeating Plymouth 50-40 at the Paul Chapman & Sons Arena.

The Lions now have a four-point gap on Kent who are just outside the play-off zone, with the reigning champions also having a meeting in hand.

Skipper Kyle Howarth (11+2) and Hans Andersen (11) led the way against the Gladiators, whilst Zaine Kennedy scored 9+1 and youngster Dan Thompson took the scalp of visiting star Jason Crump from the back when they met in Heat 10.

Andersen said: “I was surprised by how hard Plymouth were pushing us, and it’s always tough going up against the likes of Crump and Lawson.

“But our boys enjoy riding this track and we had some excellent races, particularly in the second half of the meeting; some of the younger lads really came into their own.

“This was a big win for us in more respects than one, and moving forward we need to be picking up points everywhere to keep the pressure on the other clubs in the top six.”