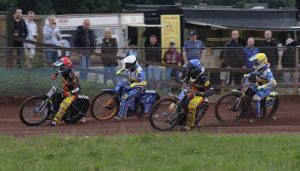 LEICESTER closed the gap on Championship leaders Glasgow with a convincing 56-34 home victory over Eastbourne.

The Lions responded to Wednesday’s frustrating narrow defeat at Birmingham in fine fashion with a solid team display.

Ryan Douglas dropped just one point from five rides whilst Hans Andersen was denied a paid maximum in the final race of the night by British Under-21 Champion Tom Brennan.

Team boss Stewart Dickson said: “Wednesday night has been well documented by enough people without me adding to it anymore – this was about how we responded and we responded very well.

“It was a good team performance, pretty solid, and it was nice to have a choice of riders again in Heat 15.

“I thought the track was really good tonight, I know there wasn’t a lot of passing but it was fast and it was close racing. All-in-all this was a decent night for us.”