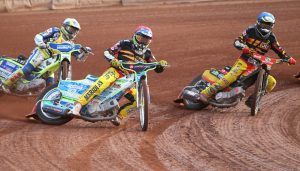 LEICESTER bounced back to form with three unbeaten riders in a 63-27 hammering of Midlands rivals Birmingham.

Nick Morris (14+1) scored a five-ride paid maximum in an emphatic home win, with Kyle Howarth and Hans Andersen also being paid for a full house from four outings, and youngster Dan Thompson was handed his first Heat 15 appearance.

Chris Harris scored 11 for the Brummies, who were limited to three race winners and conceded a succession of mid-meeting 5-1s.

Leicester boss Stewart Dickson said: “I think Birmingham were a bit off it tonight, it’s been a difficult week for them as a club – but without sounding cold it’s not our problem, although I wish them all the best.

“From a Lions perspective, it was important that we bounced back, and I don’t think the scoreline flattered us to be honest.

“It was the kind of solid, proper team performance that we should be doing, and it was a good response after an indifferent week.

Birmingham manager Laurence Rogers said: “That was beyond disappointing. I said on track walk that we had to get our gating gloves on, but we were second best away from the starts all night.

“Tonight wasn’t good enough from us as a team but now all attentions turn to Wednesday at Perry Barr in what is a massive night for Birmingham Speedway in more ways than one.”